Steve Geller has been involved with gambling law issues as either a Legislator or attorney for 30 years.

Geller served on the committees regulating gambling for all 20 years that he served in the Florida House of Representatives and the Florida Senate, including serving as Chair of the Committee.  Geller was the Founder of the National Council of Legislators from Gaming States (NCLGS) and served as its National President for 10 years.  Geller is now a Senior Advisor and Special Counsel to NCLGS.  Geller served as National Chairman of the National Public Sector Gaming Study Commission.  Geller was the author of many pieces of gaming legislation, including the bill which authorized cardrooms at Florida Pari-Mutuels, and was actively involved in many other pieces of gambling legislation in Florida.

Geller speaks across the United States on a regular basis at numerous Gaming-related conferences, most often on the topics of Internet gaming, Sports Betting, Indian gaming, Pari-mutuels, and the future of gaming in the State of Florida.  He has also spoken on the Lottery, cruises to nowhere, and most other gaming-related topics.  In 2018 alone, Geller has spoken to NCLGS on Pari-Mutuels, GiGse on Sports Betting, the American Bar Association Business Law Section on Indian Gambling, and to other groups on other gambling-related topics.

Geller has represented State and National clients on gaming and other related issues and is a registered lobbyist in Tallahassee, where he has represented gaming interests in front of the Legislature and the Department of Business and Professional Regulation.  He has provided analysis on Florida and National gaming issues to Investment Houses and has given legal opinions on gaming issues to numerous clients.

Geller is rated an  “A-V Preeminent” attorney by Martindale-Hubbell, which is the highest possible rating for both Legal Ability and Ethical Standards.  Geller has been named in Florida Super Lawyers, The Bar Register of Preeminent Lawyers, South Florida’s Top Rated Lawyers, and received other awards of distinction for his legal abilities and reputation.  Geller is “of-counsel” to the prominent Boca Raton law firm Sachs Sax Caplan, giving Geller the ability to handle matters that require additional resources or attorneys. 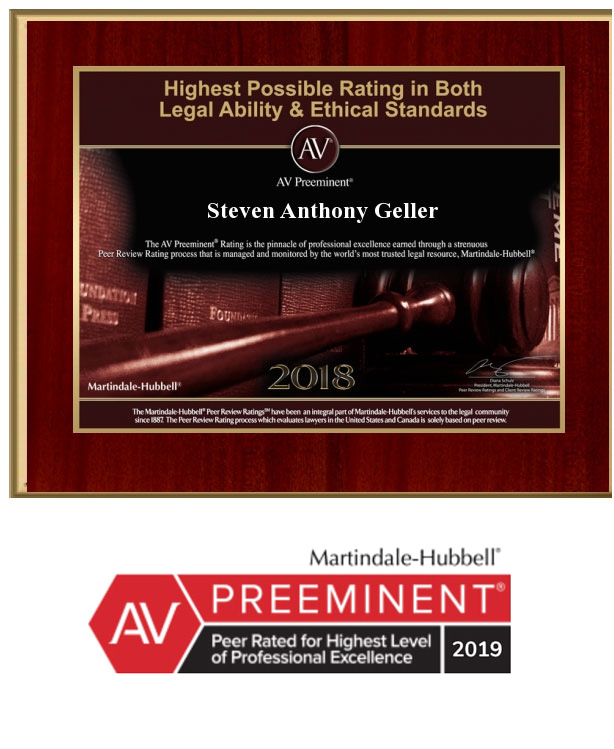